Posted in Uncategorized by admin 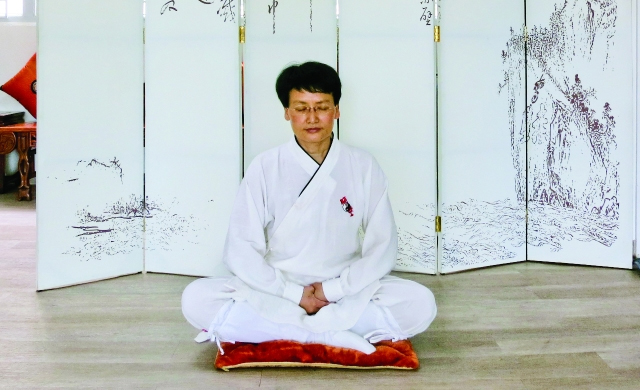 ‘‘I am an accountant and I’m always trying to explain kung fu with science and statistics.’’

When I was around 40, I really wanted to get back into kung fu. I’ve always loved Bruce Lee. I decided to quit my job as a Chief Financial Officer and leave my family behind. I went to China to learn from the kung fu masters.

I traveled to the Wudang Mountains. It really felt like a wuxia movie. My sifu, the 14th-generation master of Wudang, was just returning from practicing his kung fu for several years in a stone cave without electricity and water. A meter outside the cave, there’s a 100,000-foot cliff. I was like, “Modern men still do this?”

Wudang came from the Taoists and it’s a very complete system of training your muscles and body on the outside; and your energy and your spiritual mind on the inside.

The character “wu” itself means “stopping conflicts with physical strength.” In Wudang martial arts, the idea is to dissolve any force directed at you, rather than confronting it head-on. You have to be zen on the inside. It has taught me to let go.

One of the first moves my sifu asked me to do is to stand with my knees bent and my arms in front of my chest. I didn’t understand at all how it could train my internal kung fu and the way these sifus teach, they don’t explain anything. They just say, “Do it and you’ll get it.”

After three months of practicing the same move, I could feel the way my blood and qi flowed in my body. My conception and governing vessels [which are said to control the flow of Yin and Yang energy] were opened up. I could do kung fu moves not just with muscle strength, but with power from my qi as well.

In the Wudang Mountains, you can’t tell men and women apart from behind. All dress in Taoist robes and wear their hair in a bun, because they believe it’s nature’s rule that your hair grows. I am an accountant and I’m always trying to explain kung fu with science and statistics. I’m not joking—my fingernails, toenails and hair have grown faster since I started practicing internal kung fu.

I returned to Hong Kong after four years, because my husband really wanted me to. I had a better temper after practicing kung fu, but his has became worse with age. My passion for kung fu has definitely affected my marriage, but it’s a balance I have to work out.

A bowl of wonton noodles went from around $13 to $30-something while I was gone. I have to make a living and so I teach Wudang, Tai Chi and Shaolin kung fu. I have national qualifications and I’ve won over 20 gold medals. I don’t charge those who can’t afford to pay.

A student of mine is very fit and but he had trouble sleeping for over three years. Your outside can be well-trained but if your inside isn’t, you’re not truly healthy. I taught him Wudang sleeping kung fu, which nurtures your internal organs and your qi when you sleep. After two months or so, he was able to sleep for three to four hours straight. It feels great knowing your kung fu has helped another individual. 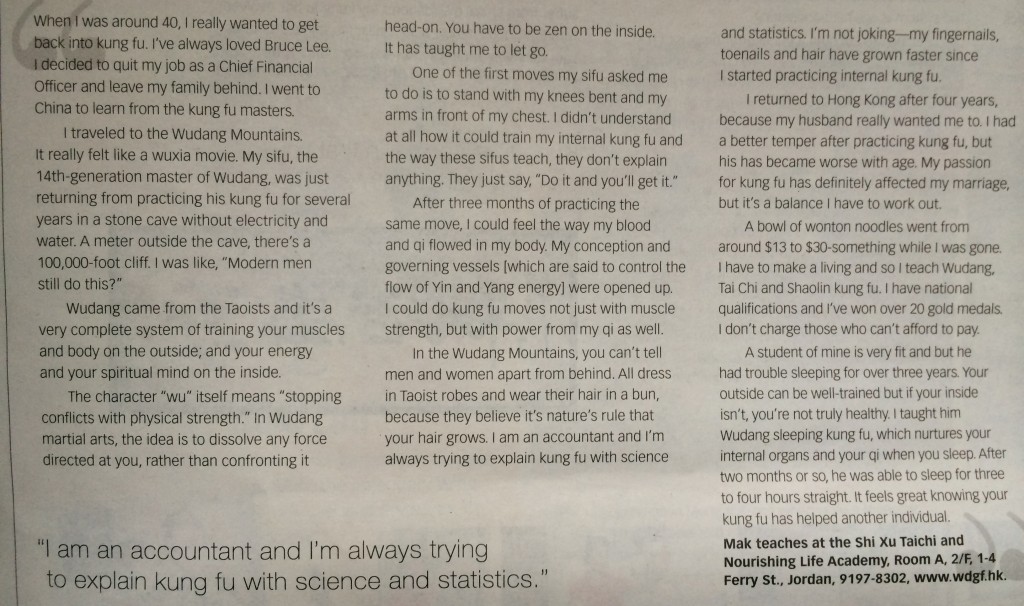